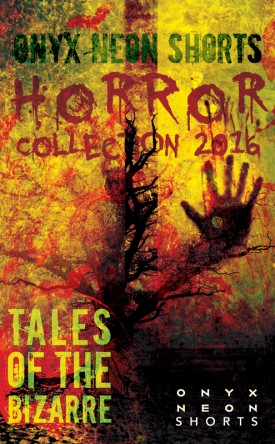 Haunted burial grounds where the dead come back; a demonic force born of mankind thriving in the outskirts of space; a sadistic abuela with a dark secret; the undead of winter coming back for their former captor; two men discover a mystery in the wilderness; a wondering showman just wants a little respect; four hunters go in search of a Big Game only to discover they are the ones being hunted…

Onyx Neon Shorts Horror Collection is an annual anthology that celebrates one of literature’s most popular forms. Featuring seven up-and-coming stars of the horror genre from all over the globe, satisfying your need for wicked tales of the bizarre, weird, and unexplainable.

Chestnut Hill by Joseph Rubas
A group of people are besieged by demonic beings on a cursed, remote hilltop.

The Corners Have Arms by Jeremy Hepler
When Sophie’s ex-husband doesn’t return their twin daughters after their week-long visit with him, she fears the worst. Maybe he’s kidnapped them, taken them across the border, or worse. She goes looking for her children. If she finds them, will it be worse than she possibly ever imagine? And will she ever make it back?

The Case of Yuri Zaystev by S. L. Edwards
Yuri Zaystev has a thankless job: driving the victims of Stalin’s purges into the darkness of the Arctic. One night, something goes horribly wrong. Yuri Zaystev, gulag guard and proud supporter of the purges, finds himself the victim of a violence he helped unleashed.

Sweetie by Michelle Ann King
A travelling showman and his demonic companion teach their latest audience a little respect.

Failsafe by Karen Bovenmyer
Space salvager Kira hates dead bodies. When she finds a lost colony ship, ripe with corpses and a huge finder’s payoff, she’s happy to report the location and leave well enough alone—until she receives a distress call from a little girl trapped aboard.

Partisan by Brit Jones
Four big game hunters enter the deep woods of a war torn country in search game. It isn’t long before they realize that it is they who are being hunted.

The Marked Men by Ben Stallwood
Two men, one recently bereaved, go on a hiking trip in a Norwegian forest. This tale of suicide and loss will leave you breathless and unnerved.