As this is the first of these that I’ve done, I’ll explain the basic premise. Netflix at Random is an ongoing series of posts where Jeffrey P. Martin (me) watches Netflix movies and shows at random. These movies will be things that other people haven’t recommended. Sometimes there will be some level of knowledge of the movie, such as with Journey To The West (which I’ll post about later…god it was bad). In this case, there was no prior knowledge of the movie. Purely selected because of how badass the cover is.

Wyrmwood: Road of the Dead is a low-budget Australian zombie movie directed by Kiah Roache-Turner. It starts out with three men body armor shooting zombies and trying to pull a truck into a garage. Classic in media res. From the first scene to the last this movie is filled with badass iconic imagery, guts, gore, and buckets of blood. Like all zombie movies, it tells the story of a group of survivors. They get caught up in a weird pseudo-government plot to experiment on zombies, and the results are surprising.

This movie isn’t quite Hobo With A Shotgun bad, but it’s pretty close. For quality it’s somewhere between Wolf Cop and Slither. It’s not the worst movie in the world, but it’s certainly not the best.

It’s really intense. Like, non-stop action from start to finish kind of intense. There are a couple scenes of quiet, calm sadness, but then it goes right back into jarring camera work, high contrast cinematography, guns, guts and more blood.

Good qualities:
Lots of really memorable and iconic moments such as: the disco dancing doctor, the opening sequence, and the tunnel scene with Barry and his wife. Or the armor. Very unique looking characters. 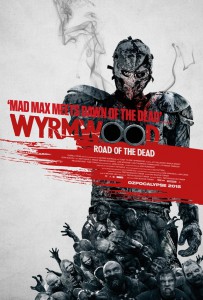 The promotional design work is absolutely killer. I picked this movie purely based on this poster. All the other design work for the film is equally as badass looking. Yes, I know, that has nothing to do with the quality of the movie, but just look at it!

They also do what you always want zombie movies to do: load up on armor. Because, really, Walking Dead, why would you discard your body armor and riot shields after you got them? Are you fucking kidding me?

Whoever designed the costumes in this movie is a fucking genius. Seriously, Barry’s armor is iconic. Like Fallout, Brotherhood of Steel level cool. It’s the one featured in the poster.

There’s a twist involving Brooke that I won’t ruin, and it almost makes up for the fact that the first half of the movie she spends tied up. Either way, it’s a nice change of pace from your standard zombie fair.

Bad qualities:
This movie is cheesy as fuck. Dialogue ranges from silly to bad. Thankfully there isn’t much of it other than one liners.

This entire movie takes place in a 36 hour-ish period. That’s a lot of plot to have happen in less than two full days. End of the world to science experimentation on zombies in about 12 hours. Not really believable.

Random bible references that seem out of place given the rest of the movie. Even if it makes the title of the movie make sense, it didn’t really have to be explained. It was just a good title, why throw in biblical references?

The movie isn’t supposed to be anything really mind blowing, but as far as cheesy, horror, zombie movies go, I rather enjoyed this one. There is a lot of garbage on Netflix. This was definitely worth watching if you like action-horror.

Below is the trailer:

Written by Kiah and Tristan Roache-Turner