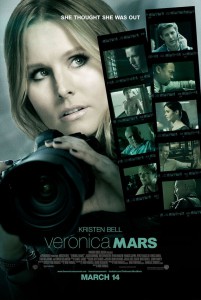 By now, it is not news to most that the Veronica Mars movie has become a novelty in filmmaking funding, but what will be news is how this innovative process will turn out. Will it be lucrative enough to drive other filmmakers to follow suit for movies that don’t get the funding they need through traditional methods?

For those of you who live under a rock, Veronica Mars was a teen detective show featuring a young, snarky Kristen Bell in the titular role. A show that was cancelled after a three season run, much to the chagrin of its avid fan base. This same fan base demonstrated their enduring love for the show when creator Rob Thomas started a Kickstarter campaign to fund this project, raising more than $5.5 million, surpassing all sorts of Kickstarter records. Veronica Mars had been given a second chance at life.

Seven years after the show’s cancellation, we get to revisit the fictitious town of Neptune, CA, and it’s a terrific ride down memory lane. Veronica has grown up, interviewing for her first lawyering gig in New York, having left her life of sleuthing behind in Neptune. But when bad boy Logan, Veronica’s ex, is accused of murdering his popstar girlfriend, she returns to clear his name. Veronica swears she had left this life behind but sucuumbs to the pull of investigation because the story simply doesn’t add up. Back down the rabbit hole she goes, camera in hand, breaking and entering, getting arrested—the whole shebang. All the characters we’ve grown to love are back, and we’re led into a story that feels familiar, yet a little more mature. Oh, and there’s a delightful and unexpected cameo by James Franco.

It’s not a flawless film by any account. Lots of elements aren’t fleshed out fully, but it’s a fun ride, paying  homage to its fans and its history with inside jokes abounding. It’s not quite as polished as a film should be; it feels more like a TV show. But then again, it was, so perhaps this is appropriate. It has a nice edgy feel, giving us just enough of a taste to be satisfied with our second dose of V. Mars, but leaving plenty of room for more stories to unfold. And I hope more stories will unfold, but that depends entirely on how much money the film actually makes. 20 days into its release, and it’s just reached the $3.2 million mark. It’s not an impressive amount, to be sure, but it also was only released to 270+ theaters nationwide. The entire state of Tennessee (where I’m from) didn’t have a theater showing the film, so I had to rent it through iTunes on opening day. Following a glee-filled moment of shock, I purchased a ticket to our local art house theater that had decided to pick it up for a week run—two weeks into its release.

Will non-fans go to see the film? Will enough fans see it? At this point, probably not. But the superfan in myself has all my fingers crossed—and let’s be honest, toes as well. I desperately want this movie to be enough of a financial success for other short-lived TV gems to be reborn as well. Pushing Daisies comeback, anyone? Hollywood just wants to make money, like any other entertainment business. When fans start proving their love and devotion through their wallets, Hollywood starts listening. So this is my plea to you. Put your money where your mouth is.

What’d you think of the movie? Would you want to see more movies with funding models like this?